Charlie celebrates his 100th birthday at The Lawn care home 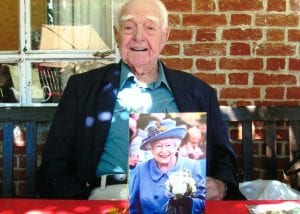 The Lawn care home in Holybourne, run by charity Friends of the Elderly, celebrated the 100th birthday of one of its residents, Charlie Smith, last week. The team at The Lawn and Charlie’s family threw a cream tea party to celebrate.

Charlie was born on the 27 June 1918 in a village called Meonstoke in Hampshire where he then spent his childhood. When he was 18 years old he joined the RAF and then went on to working for British Airways as an aircraft engineer. Charlie married Joan in 1940 and they went on to have two children. Charlie now has seven grandchildren and twelve great grandchildren.

Charlie has been well known in his life for his DIY skills and has a passion for growing apples and he had apple trees in every house he has lived in.

Carol Derbyshire, Charlie’s daughter, said: “He is a good Dad and Grandad and is supportive of all his family.”

Cheryl Rothschild, Regional Director at Friends of the Elderly, said: “Charlie has lived with us for three years now, he is a well-liked resident and so we had a brilliant time celebrating his 100th birthday with his family.”