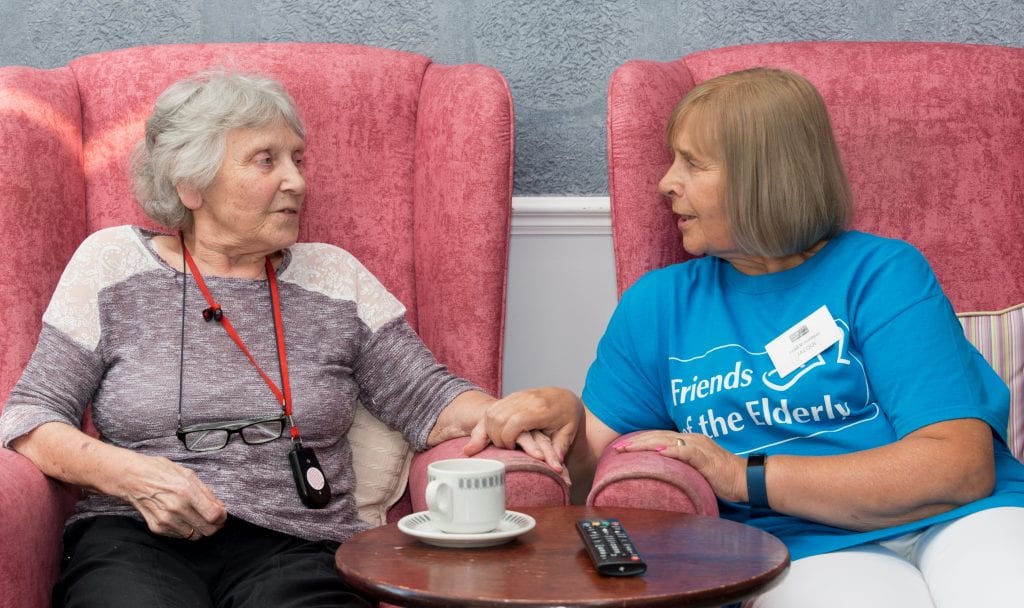 Jacqui Clevely has been involved with Moor House since her mother first became a resident back in 2005. Jacqui’s mother spent her last two years living at Moor House with Jacqui visiting six days a week – she almost felt as though she lived there too.

“The staff at Moor House were so kind to Mum and they made me feel so welcome, Mum really thought of it as her home.” When her mother passed away in 2007 the job of Activities Co-Ordinator was vacant and Jacqui didn’t hesitate to apply so she could still be part of the home. Two years later, when she turned 60, Jacqui decided to retire but just two months after retirement, she returned to Moor House as a volunteer – “I just couldn’t keep away!”

Fast forward to 2018 and Jacqui has been part of the team at Moor House for more than ten years and says: “I love spending time with the residents at Moor House, I take great pride in treating the people who live there the way I would have wanted my parents to be treated.” Jacqui visits the home at least twice a week for a number of hours. She runs the mobile shop, which sells confectionery, snacks and toiletries to the residents – if she doesn’t have something they would like, she goes out to buy it and takes it in to them. Residents who do not have family nearby really value this support Jacqui gives to them.

As well as the mobile shop, Jacqui helps by serving drinks at Happy Hour on a Thursday, baking cakes for tea party events, spending time speaking with the residents and getting involved with activities such as exercise classes and knit and natter – “to be honest I get involved in anything that’s happening at the home! I also volunteer at Summer fetes and Christmas parties as well as on promotional stands in the community.”

Jacqui speaks of her volunteering at Moor House with so much passion: “Working and volunteering has changed me in so many different ways – I do things now that I would never have done in previous office jobs. I am much more confident and active. I love making cakes for events at the home, my light sultana cake is a favourite but I also love trying new recipes – I’ve been challenged to make a diabetic cake, which I’m working on!

Speaking with residents is so special, they have so many amazing memories to share and for me it brings back memories of when my parents were alive.

We asked Lyn Spivack, Manager of Moor House, what she thinks the residents get from Jacqui’s visits: “Our residents absolutely love to see Jacqui – they really look forward to her visits and they absolutely adore her cakes. We wouldn’t be without her – she brings so much to our team and is so dedicated to her volunteering with us.”

To find out how you can volunteer for Friends of the Elderly’s homes and services click here or call 0330 332 1110.